After recently dipping its toes into the realm of flagships late last year with the surprisingly excellent Edge 30 Ultra, Motorola is kicking off 2023 by returning to its budget roots, with the announcement of five new affordable phones. Four of these phones are new entries in the Moto G lineup, with the G73 5G, G53 5G, G23 and G13 replacing several existing family members, while the fifth model, the E13, enters the brand’s ultra-budget series of phones.

Motorola’s new smartphones cover a relatively wide price range and, in some cases, come uncomfortably close to each other. Let’s take a look at what each of these new phones has to offer.

First up, we have the Motorola Moto G73 5G, which is the most expensive of the bunch at £270. There’s a 2.2GHz MediaTek Dimensity 930 octa-core processor inside, paired with 8GB of RAM and 256GB of internal storage. The dual SIM tray can also hold a microSD card in place of the second SIM. Other notable features include a 3.5mm headphone jack, a side-mounted fingerprint reader, and face unlock. 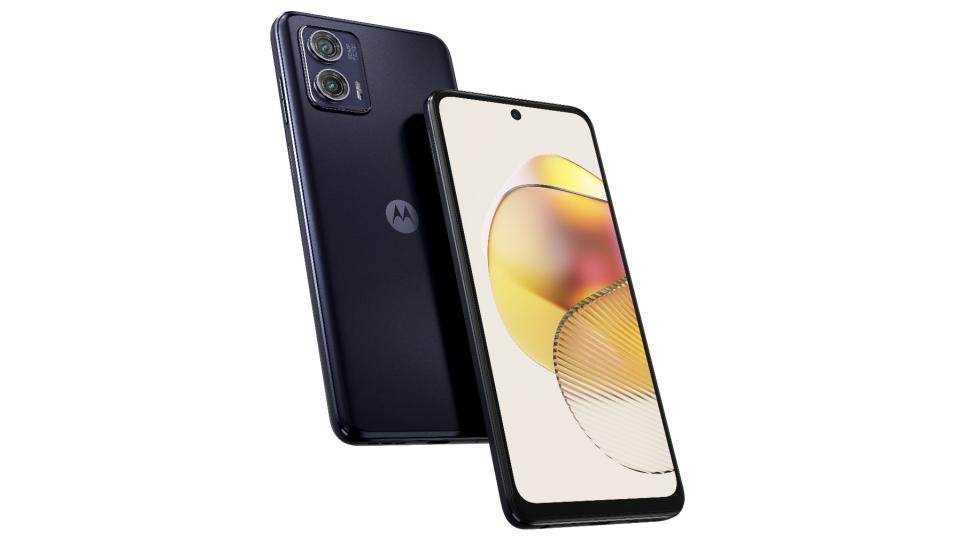 The screen itself measures 6.5 inches across the diagonal, with an FHD+ resolution and a 120Hz refresh rate. The 16MP (f/2.4) front camera sits centered at the top of the screen, while the rear camera module includes a 50MP (f/1.8) main lens and an 8MP (f/2.2) secondary sensor that handles ultrawide stills. macro and depth. . A large 5,000mAh battery powers the phone, and while no battery life figures have been confirmed, we do know that it will support fast charging via the supplied 30W charger.

The Moto G73 5G will run Android 13 right out of the box and also comes loaded with Motorola’s Thinkshield security platform and the Moto Safe app. The latter controls network security and application permissions, as well as allowing users to create a secret folder to house sensitive data. There’s also the parent-focused Family Space function, which lets parents limit screen time for their children and control which apps can be accessed.

Motorola Moto G73 5G is scheduled to be released in early March 2023, with a retail cost of £270. It will be available in two colors, Midnight Blue and Lucent White, although at the time of writing, only the Midnight Blue variant is listed on Motorola’s website.

The other 5G-ready model, the Moto G53 5G, comes in slightly cheaper than the G73 5G at £190. This device also runs Android 13 from day one and comes loaded with the same suite of Thinkshield functionality, Moto Secure and Family Space. The 2.2GHz octa-core Snapdragon 480 Plus processor and 4GB of RAM match last year’s Moto G62 5G, but the storage has at least been upgraded to 128GB. And again, there’s room to use a microSD card of up to 1TB. 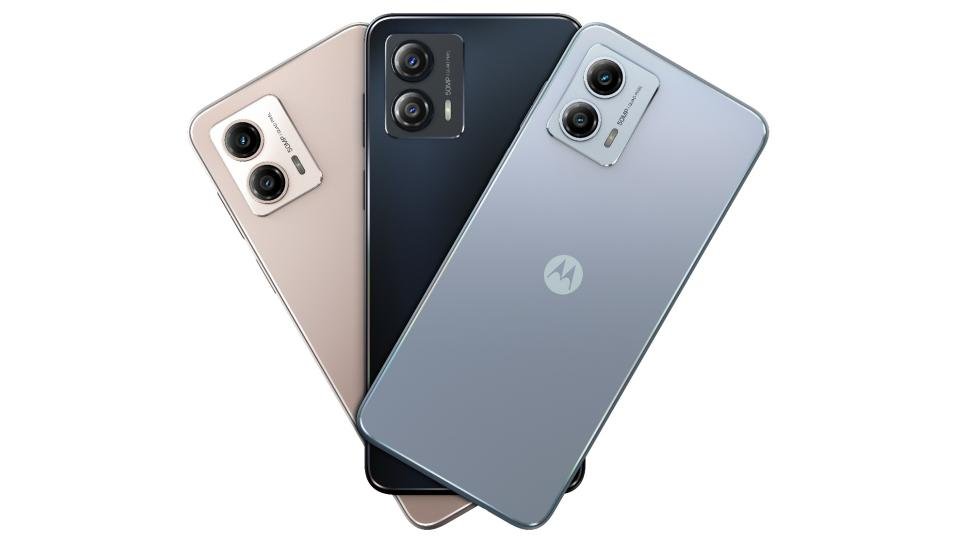 Justifying its price compared to the now-discounted Moto G62 5G is probably the G53’s biggest struggle, as the other specs are either similar or slightly inferior. The battery capacity is 5,000mAh, but fast charging is only 10W, compared to the G62 5G 15W, and while the 6.5-inch screen has a 120Hz refresh rate, it only has HD+ resolution. The main camera is again a 50MP sensor, though the extra 2MP macro lens is dropped, folding those functions into the 8MP ultra-wide lens.

The Moto G53 5G will be available in three colors: ink blue, arctic silver, and pale pink. All three colors are due early March, with prices starting at £190.

This is where the pricing starts to get a little messy. Traditionally, though not always, the G series of phones operate on the rule that the higher the number, the better, but here we have the G23 model which costs £10 more than the G53 5G, despite its lack of 5G connectivity. So what do you get for £200? For starters, the processor is a 2GHz MediaTek Helio G85 octa-core processor, backed by 8GB of RAM and 128GB of storage — again there’s microSD support, but you can only use cards of up to 512GB. 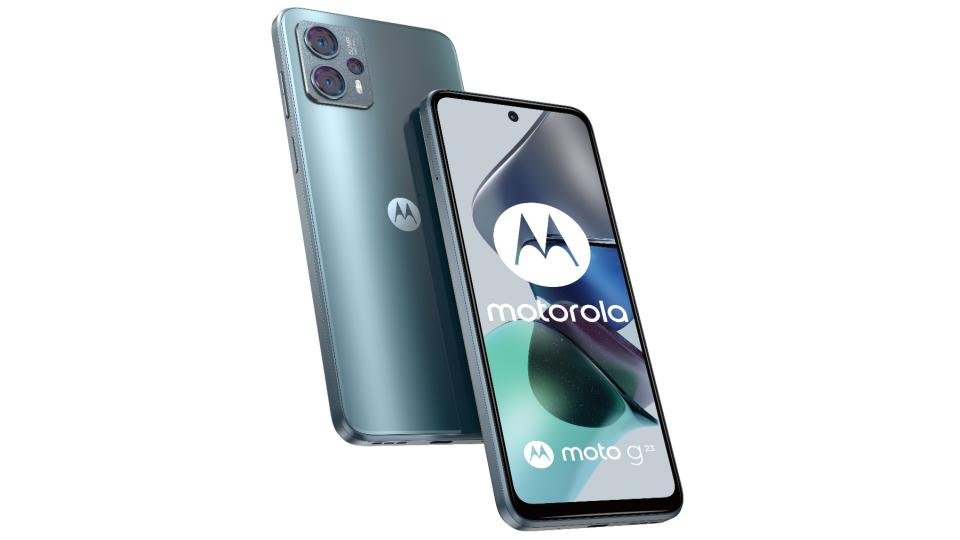 It features a 6.5-inch screen with a 90Hz refresh rate and HD + resolution, with the rear camera assembly consisting of a 50MP main lens, 5MP ultra-wide, and 2MP macro lens, while the battery is 5000mAh. Here we see the first big advantage the G23 has over the G53 5G, with fast charging up to 30W. You also get an official IP52 rating here, as opposed to the vague “waterproof design” of the aforementioned models.

As with other 2023 phones, the Moto G23 has a confirmed launch window of early March. When that rolls around, there will be three color options on offer: Pearl White, Steel Blue and Matte Charcoal, priced at £200.

While the G23 bucks the trend, the Moto G13 returns to a familiar pricing pattern, with a retail cost of £150. Given the price difference, it’s surprising that this isn’t much different from the Moto G23. The dimensions are identical (162.7 x 74.7 x 8.2mm), the weight is very similar, at 184g, and it’s also IP52 rated. Beyond that, the screen is the same 6.5in, 90Hz, HD+, the battery is again 5,000mAh and even the processor and storage are identical, though you only get 4GB of RAM here. 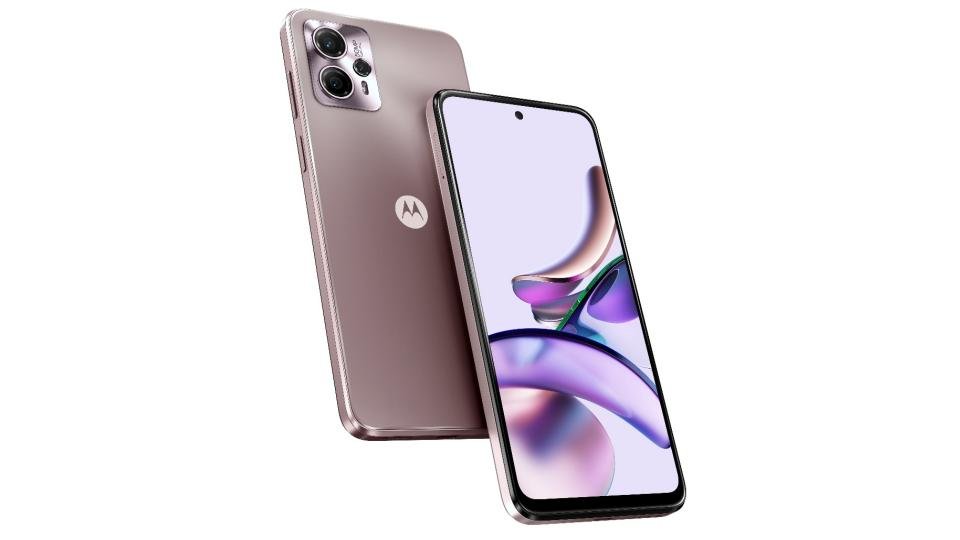 We start to see the main differences when we look at the cameras, with the selfie unit dropping to 8MP, the main 50MP camera linked to a pair of secondary 2MP sensors, for depth capture and macro. Fast charging is also notably less powerful than the G23, with a 10W charger offered, instead of 30W.

The Moto G13 is due to be released in early March, with a starting price of £150. Three colors will be available: matte charcoal, lavender blue, and rose gold.

Rounding out a slew of new devices is the most wallet-friendly of the bunch: the £90 Motorola Moto E13. Where the G series phones use Android 13 out of the box, here you get Android 13 Go, which is a cut-down version of the platform designed for low-power phones. This fits the internals, which include a 1.6GHz Unisoc T606 octa-core processor, 2GB of RAM, and 64GB of storage. Unlike the Moto G23 and G13, the E13 accepts microSD cards up to 1TB. 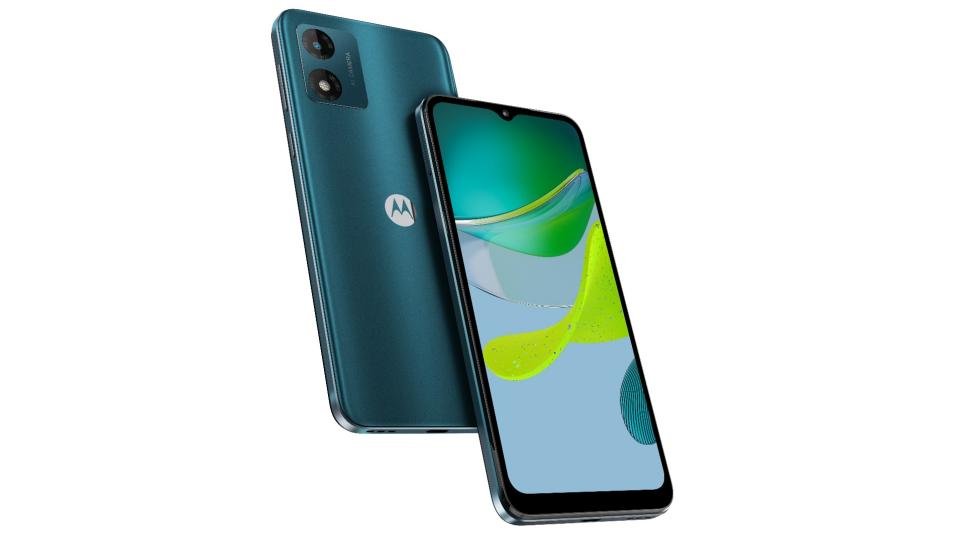 The cameras are equally no-nonsense, with a 13MP (f/2.2) main sensor and a 5MP (f/2.2) selfie lens. Despite the price, you still get a 5,000mAh battery and a 10W charger like the G13, although you don’t get any fast charging capability. The side-mounted fingerprint sensor found on all G devices isn’t here either, but the E13 still features face unlock.

The Moto E13 is looking forward to an early March release window. Three colors will be available at launch, Cosmic Black, Aurora Green and Creamy White, with all models priced at £90.

Aside from the sparse pricing strategy, there are two potential problems we can detect ahead of time. Notably, two devices on the more expensive end of things, the G53 5G and G73 5G, don’t feature an official IP rating for dust and water resistance, something we’ve criticized budget Motos in the past. They each claim to have a “waterproof design,” but that’s not as reassuring as the certified IP rating.

Another thing to watch is that many of these new phones look like they might struggle to prove their worth when compared to previous models like the Moto G62 5G. We’ll be able to put them right through their paces as the early March release date approaches, so check back soon to see what we think of Motos’ latest budget installment.