A reasonably resourceful person, with a bit of willpower and a certain amount of swearing, he can handle most things (except tire change and long division). This is the way I think of myself.

So when I was asked if I’d give up my smartphone for a ‘brick’ Nokia phone for a week, I thought, why not? After all, I spent the first half of my life without a cell phone, living without texts or Google Maps. So I can definitely manage a week. Really, how hard is that?

Instead of a nifty iPhone 12, I’m given a not-so-smart smartphone, the Nokia 109, not so much a brick as a pebble but without an internet connection. This is the kind of phone, Children’s Commissioner Ms. Rachel de Souza recently advised parents to buy for their children, to help keep them away from social media.

The good news is that they are small and light and can easily fit in my pocket. When I put my sim card into the sleek phone, I feel a tingle of nostalgia for the first cellphone I ever bought, a Motorola foldable that comfortably fits in the smallest evening bag. My eyesight was obviously better then. It’s hard to complete setup on the small 1.77 inch screen. In comparison, my iPhone’s screen is 6 inches. 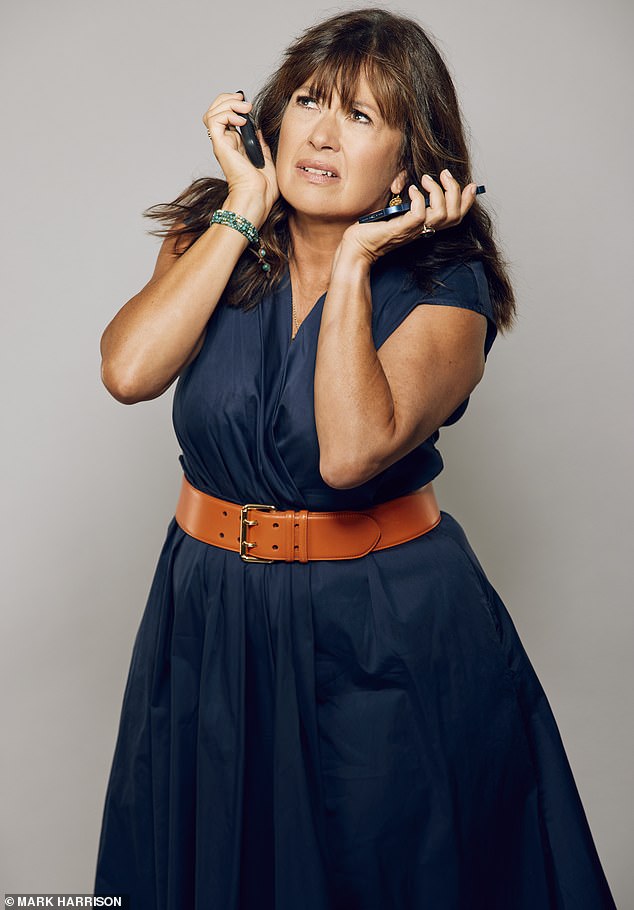 Daisy Goodwin (pictured) thought it would be easy to give up her smartphone for a week. The UK-based journalist swapped her phone for an old Nokia

First, I have lunch with my aunt. She wants to see my daughters picture. I reached for my phone. . . And I realize my Nokia doesn’t even have a camera. I think wistfully of the crumpled snapshots I used to carry around in my wallet and vow to print some of the millions of photos I store in the cloud.

It’s my first experience of so-called “digital exclusion,” the widening gap between those of us who are keeping up (or nearly) with technology, and those who are in danger of being left behind.

As more and more aspects of our daily lives are transformed into “high-tech” solutions, many people risk not being able to access essential services. Even grocery shopping can become a challenge. Earlier this year, Tesco faced customer backlash for introducing more self-service checkouts across its stores, with nearly a quarter of a million signatures calling for it to “stop replacing people with machines”.

The problem is highlighted by the latest figures from Ofcom, which show that only 55 per cent of those over 65 use smartphones and that ‘digital poverty’ is a barrier facing around 11.3m people in the UK. Even if cost isn’t an issue, people may simply stick to habits that have served them well — like using cash instead of a bank app — but now leave them at a disadvantage.

The charity Age UK has warned that drivers should be penalized for not being able to pay for parking through an app, as many car parks charge more if you use cash. From dating to shopping to ordering takeaway, smartphones are now an integral part of life. 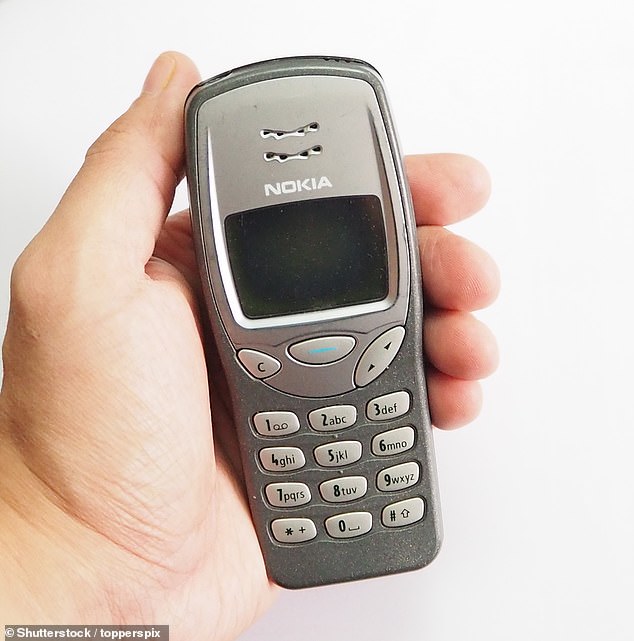 Daisy found the week tough, concluding that smartphones have become an essential part of the fabric of everyday life in the 21st century.

While cycling home from lunch, I hear a noise that takes me back to the chart of Dom Jolie as the comedian rambled around with a huge phone (it was ringing somewhere general, then he said, “I’m on my cellphone! “). I stop cycling—no bluetooth headphones with this kid—to answer the call.

“Hi,” says a polite but somewhat cold voice. “Wasn’t we supposed to have a Zoom call right now?”

Excuse me! Without the calendar function reminding me of my upcoming meetings, I totally forgot to talk to a TV producer about a new project. I explain what happened and the caller laughs.

Oh, that explains why when I texted you, it turned green instead of blue [indicating the receiver doesn’t have an iPhone].

I always think these people are technologically illiterate.

Once home, I decided to cheer myself up with the purchase of the green shoes I had been coveting for months and had just gone on sale. I enter my details into my laptop but have forgotten the two factor authentication that is often included in the online purchase process.

I can receive the automated security text on my little phone, but I can’t access the bank’s app that allows me to confirm the transaction is genuine. No shoes for me.

Waking up the next morning is bleak. My usual routine is listening to Radio 4, reading papers on my phone and brainstorming with Wordle. Without my smartphone, none of that is possible.

I ran down the street to get a takeaway cup of coffee, but I forgot that Pebble (as I now refer to my old mobile phone) can’t pay for things like my trusty smartphone. The wallet functionality means that I rarely need my physical bank card anymore.

I’m caffeine-deprived and a little information-deprived by the time I get to the London Library, where I like to work. It was a boring ride, because I usually listen to podcasts on my smartphone, and my e-bike had a dead battery because that’s measured by an app, so I didn’t notice it was nearly dead. However, I appreciated the sounds of central London and had an idea for a new scenario, so maybe it wasn’t all bad – and I was safer without distractions.

Within the library, the lack of holes in my focus by the constant connection of WhatsApp groups that I am so afraid to leave is a definite plus in terms of my productivity. Likewise, not having access to the Instagram fix is ​​definitely good for my job, my self-esteem, and my bank balance (I’m an impulse Insta buyer).

But my present-day snooty calm was shattered when I started getting text messages from my daughter about what she wanted for her 22nd birthday. Every text is loudly announced, and while you can turn off the ringtone on a pebbled phone, it’s impossible to silence texts (at least, I can’t crack them). Since my youngest daughter is a digital native and texts faster than I think, my phone has become a general nuisance in the quiet of the library.

I try to text her to stop texting me, but typing on a numeric keypad—where you have to hit the 7 key four times to get an S—is like picking up individual grains of rice, so it takes about ten minutes to manage Whoa. Then I called her, forgetting that anyone under 30 doesn’t use a phone to talk unless it’s for a video call, so answering a ringing phone is about as unfamiliar a concept as black and white TV.

In the end, I wrap the phone in a jacket and stash it at the bottom of my bag.

The next evening, I took my father to the theatre. He may be in his 80’s, but he’s the person I call whenever I have a technical problem. When I explain I’m spending a week with a “dumb” phone, he’s worried about my mental health. It turns out he was genuinely worried because I ordered e-tickets – not accessible without a smartphone.

After overcoming this hurdle thanks to the patience of the box office staff, and after three hours of a great show, we showed up to find that the car I had booked via an app a week earlier to take my elderly father home had not shown up and I had no way of tracking him down. Twenty minutes later, we find a taxi on the street, and I curse my lack of communication for spoiling a wonderful evening.

By this point in the week, my blood pressure is steadily rising with all the frustrations of being cut off from my digital superpower.

At least, I think it is, but I can’t be sure of that because I can’t measure it without the practicality that comes with my pressure cuff.

I also can’t use my meditation app or my yoga app, or even a tracker that tells me how many steps I managed that day. This is frustrating. It doesn’t matter how many miles I walk, if it isn’t logged it won’t count.

On top of that, my streak of 76 consecutive days of learning Italian via the Duolingo app was broken, which is a serious blow. I don’t know how good my Italian is, but I used to feel cocky about getting into the Emerald League educated people.

But life must go on – and I must go to Oxford for the day to do some research. I usually buy my ticket the day before on the Trainline app – it’s easy, convenient and cheap (you get a discount if you book ahead online).

This time, I challenge the machine and get my ticket, but it’s too late, I realize my Senior Railcard is on my smartphone and I don’t have a hard copy of it. Does the ticket inspector think I’m over 60 without the digital verification? The short answer is no.

So what I saved by not buying those green shoes, I ended up spending on upgrading my ticket. And I guess what someone would do if they needed some help booking their flight? Like High Street bank branches and rural post offices, ticket offices are relegated to memory in many places, and no app can replace everything they do.

My fantasy was interrupted by a call from my daughter asking if we could go out to dinner that night for her 22nd birthday. I agree to a restaurant reservation – but soon realizes that such a thing is impossible without internet access unless I memorize the restaurant’s phone number (and even then, some only accept online reservations).

In the end, I have to call my husband and make him do it.

On the way to the restaurant, I hurried to Liberty’s to buy her a birthday present, thinking I could finally redeem some of the points on my loyalty card. But again, I forgot: no smartphone, no manual. At the end a nice lady looks at me in her system and agrees I may be who I say I am, and lets me use my points.

By this time I’m running late and have no way of contacting the restaurant to let them know I’m on my way – I don’t know the number, and without Google Maps to tell me their address I’m drowned. In the end, my husband told me where to go. It makes me realize how good I was at future planning 30 years ago, with AZ and Filofax full of useful numbers.

At the restaurant, when the cake shows up, I get frustrated, and can’t take the usual out-of-focus photo of a kid blowing out birthday candles.

I’d say that on the weekend off the grid, I’m a much wiser, more rational person. But I feel like Superman after a fight with Kryptonite that robbed him of his powers.

There are definitely pluses. Anything that beats an algorithm that’s constantly trying to sell you more stuff is a good thing, and the fact that Nokia only needs to charge once a week seems miraculous. But I feel like the smartphone has become the digital equivalent of the washing machine; Pebble is the 2022 equivalent of a bug.

In the future, I will spare a little more thought for those of us who, whether by habit, choice, or circumstance, now find themselves navigating life without one.