Back in April 2019, South Korean carriers took the lead in launching 5G and achieved first success. For example, LG U+ has posted year-on-year growth in wireless services revenue for 13 consecutive quarters, reversing the contraction seen prior to 2018. Financial reports from the carrier reveal that its wireless services revenue increased 14% in the first quarter of 2022 compared to 2018. 2019 Q1, shortly before 5G was launched commercially.

Difficult to imitate the Korean model?

Let’s look at LG U+ as an example of a carrier that has adopted an “invest early” strategy: 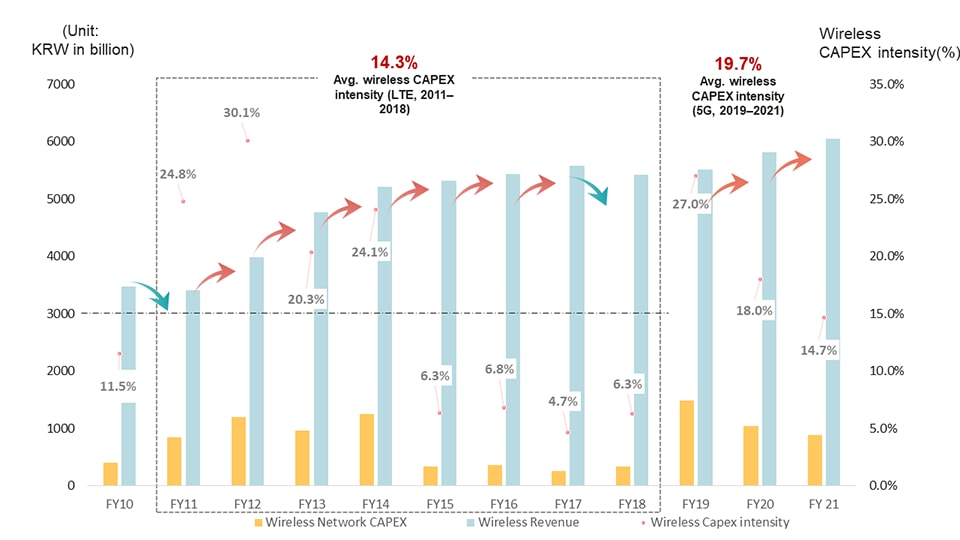 As the network has been widely deployed, three monetization methods have emerged that carriers can start right away:

Carriers often apply multiple methods from those mentioned above. For example, carriers in South Korea are also using hardware upgrades, while carriers in China are also investing in content and services.

In most 5G markets, 5G entails a much higher DOU than 4G (Figure 3). Increased traffic is what 5G companies can monetize right away. 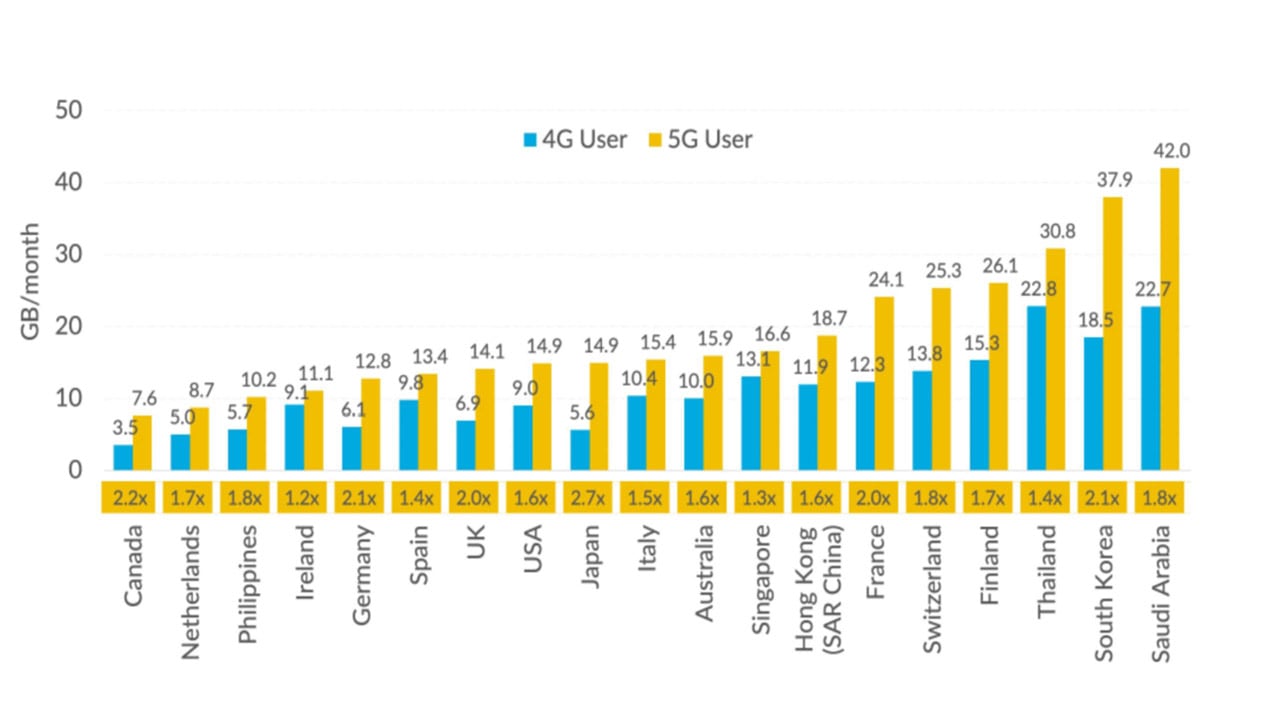 O2 Germany, which operates in a market where average monthly mobile data usage is somewhat lower than in Europe, is using 5G as an opportunity to grow and monetize traffic (see Figure 4).

In the third quarter of 2021, the monthly DOU for postpaid users at O2 Germany reached 11 GB, the highest level in the market, indicating initial success for the carrier’s goal of increasing traffic.

To better support user traffic growth in the 5G era, O2 Germany has implemented an exceptional program of “Investments for Growth”, starting a virtuous cycle of increasing traffic revenue for accelerated network deployment. 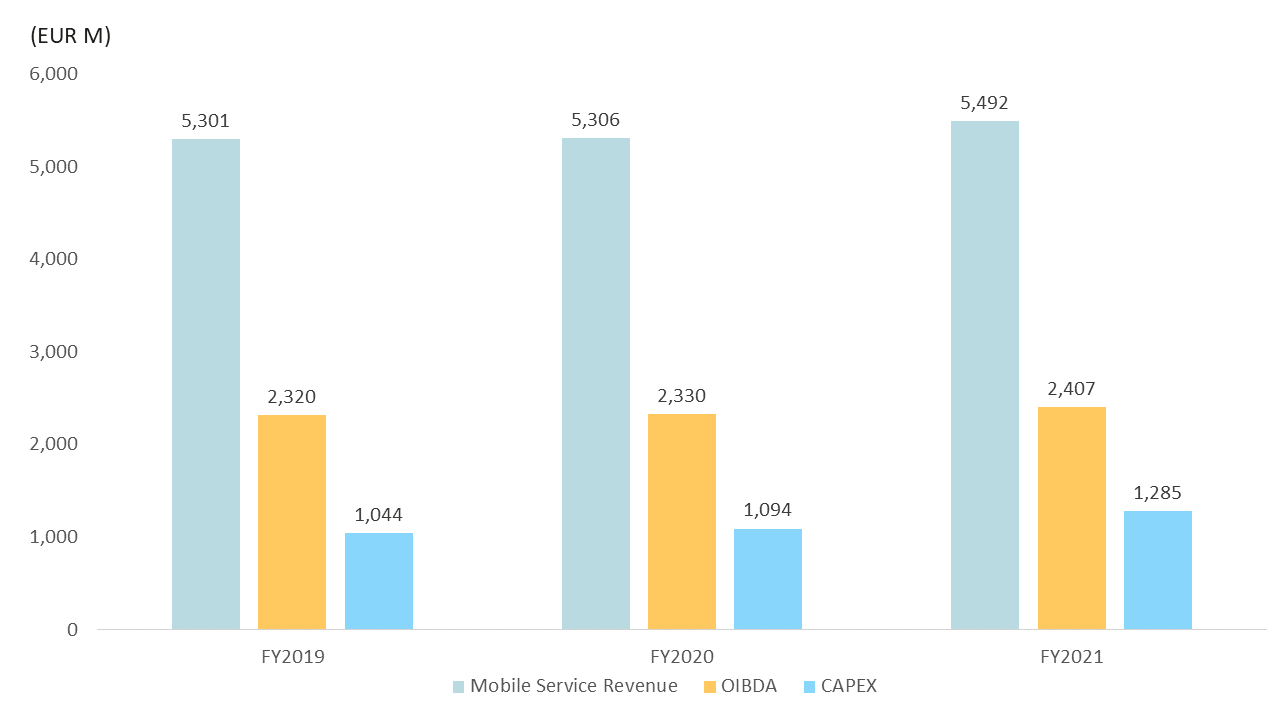 Note: OIBDA (operating income before depreciation and amortization) and capital expenditures are both comprehensive numbers.

In November 2021, T-Mobile US CEO hails 5G smartphone as first 5G killer app[1]buoyed by the dominance of US carriers in smartphone distribution and the window of opportunity to connect users to cutting-edge 5G packages using smartphone subsidies.

For example, AT&T introduced a subsidy of $1,000 (the price of the iPhone 13 Pro) to trade in several older phone models on the condition that users subscribe to its premium unlimited plan. The trade-in and upgrade program was largely driven by the iPhone 12’s halo effect and user intent surveys.

In the US market, carriers are the main distribution channel for smartphones, with Apple occupying more than 60% of the smartphone market. Apple’s first 5G phone, the iPhone 12, was powered by ‘supercycle’ 5G. In addition, new mobile phones are the primary driving force for US Internet users to upgrade to 5G (Figure 6). 10% of mobile users replace their phones within 12 months, and 24% do so within 18 months. They are the main target early adopters of 5G migration.

This wave of device upgrade has led to a rapid increase in 5G users for the big three US carriers. By the end of 2021, the total number of 5G users in the United States has exceeded 50 million[2]. Today, smartphone subsidies are still common practice in many markets where carriers serve as one of the main smartphone sales channels. However, it’s important to note that while support may be tempting, the real foundation remains the 5G network experience. This is why US carriers are scrambling to fill in the gaps by bidding for C-band and investing in C-band networks.[3].

Against the background of South Korea’s strategy to become the main source of popular culture[4], South Korean carriers have been investing heavily in and innovating content and services since the 4G era. While running their video platforms, they’ve also invested heavily in content acquisition and production. For example, LG’s U+ strategy for mobile video in the 4G era was considered a great success.

American airlines used to be ambitious in this area. AT&T acquired Time Warner and Verizon acquired AOL and Yahoo, the Verizon Media problem. However, they have changed course and have now fully embraced OTT services.

Figure 7: Vertical integration and OTT collaboration of US carriers

Obviously, own and operate is not the only approach for carriers. Even South Korean carriers are also actively working with third-party service providers in 5G. LG U+ cloud games and augmented reality services for kids are based on Nvidia’s GeForce Now and Bookful from Inception[5]Straight. 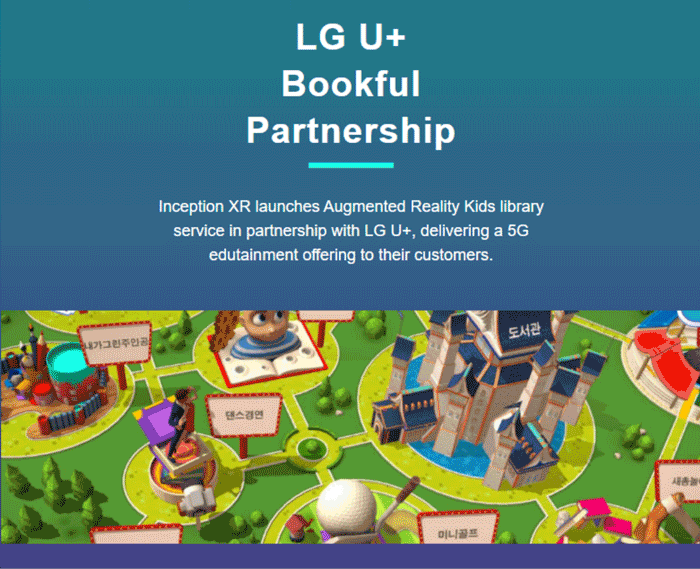 Figure 8: LG U+ working with Inception/Bookful on AR services for kids

Carriers can also adopt the white label partnership model. For example, Sunrise from Switzerland works with a partner that provides game content and a cloud gaming platform (including software and hardware servers), while Sunrise itself focuses on marketing and operation. There are a number of ways to Rome to launch 5G services: Telecom companies can choose an OTT (“EASY”) partnership model or a content production (“HARD”) model. Their specific choices depend on a few factors including the local market (eg, OTT service uptake), organization and experience (eg, content teams), among others.

The main takeaway for operators

More than three years after the first commercial launch of 5G, leading carriers in East Asia, the Middle East and Europe have crossed the gap and built a large 5G user base (about 20% of 5G users). Business performance indicators for telcos show that the growth of 5G users has driven average revenue per user (ARPU), mobile service revenue, and EBITDA margins. With the accelerating global uptake of 5G, carriers can start recruiting 5G users by providing more data allowances, faster speeds, and more offers (5G content and services) without waiting for the so-called 5G killer apps, so as to achieve the first wave of membership. growth.

The early success stories of leading 5G carriers around the world provide two outcomes for the success of the 5G business. First, the 5G network experience remains key. No 5G upgrade or upgrade would be possible or sustainable without convincing network speeds and coverage. Secondly, 5G content and services are key. Carriers must choose appropriate paths that range from low-threshold models such as third-party partnerships to higher-threshold models such as content co-production.