Another world for Qualcomm

At a press conference attended by XR today, Hugo Swart, Vice President of Qualcomm and General Manager, XR and Metaverseexplaining how the new system will reshape the augmented reality industry.

Swart explained how current challenges including battery life, form factor, field of view (FoV), use cases, frames per second, and many other factors limited the progress of AR headsets, resulting in the company needing to develop a platform Designed for augmented reality.

Qualcomm has been investing in the XR space for more than a decade, specifically with the Snapdragon XR1 and XR2 platforms. Technology companies across the industry have widely adopted the XR2 for their immersive devices, including market leaders such as the Lenovo ThinkReality VRX and A3 devices and the Meta Quest series, as well as the HTC VIVE and Pico Interactive family of products.

“We were the first to have a standalone virtual reality device that then galvanized the rest of the industry to do so [create their own]Amon said at the briefing.

Qualcomm’s latest innovation distributes the processing across the device rather than a single component, resulting in significantly lower temperatures, greater flexibility in AR smart glass designs, and greater standalone functionality, among other benefits.

The first generation of the platform will work seamlessly with Snapdragon 8 Gen 1 or higher smartphones via bonding to host processing. The smart glasses on the platform will be powered by a core processor, a coprocessor, and a communication chip to distribute the computing capabilities. 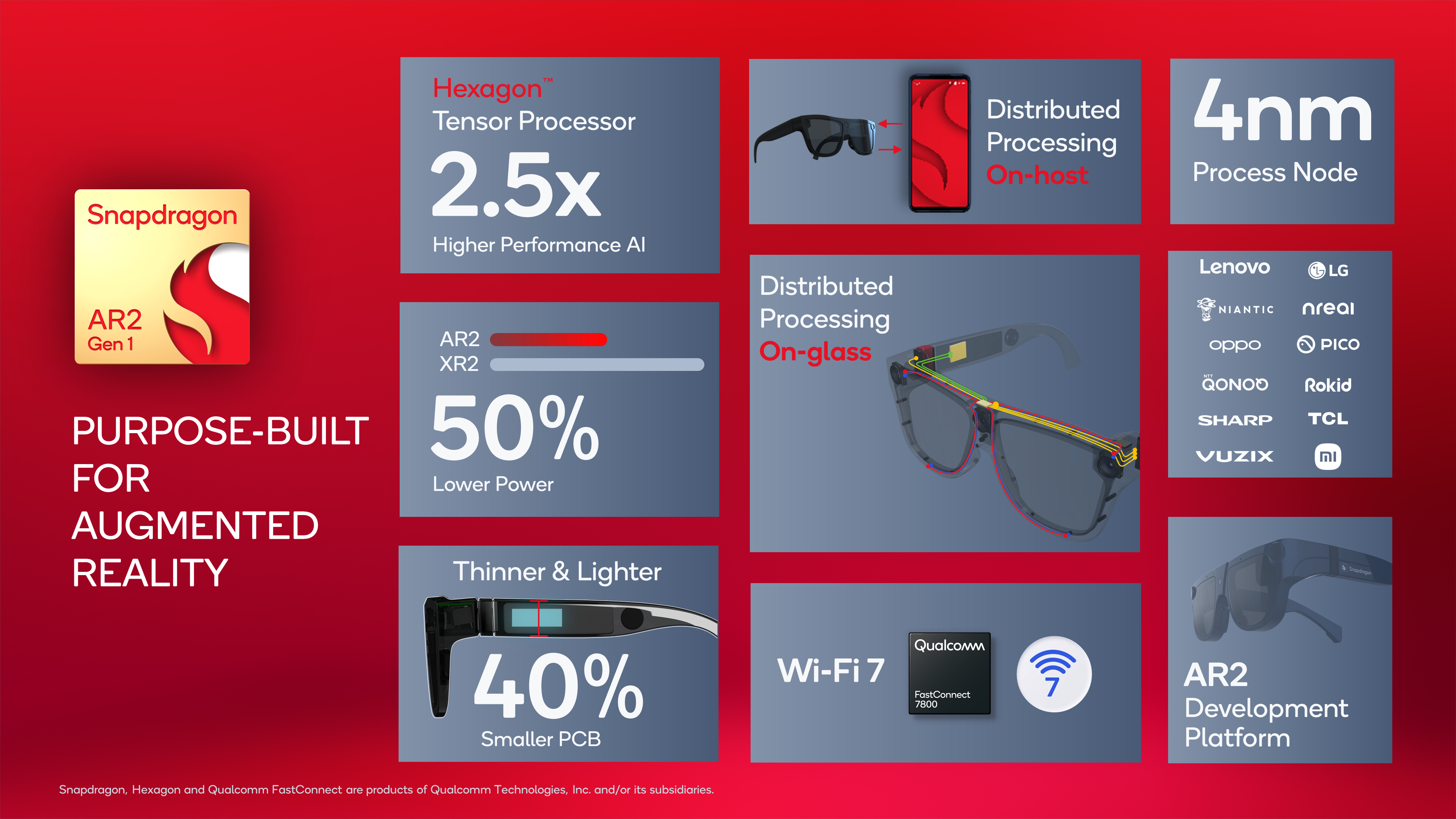 The Qualcomm exec explained that the main augmented reality processing units for display and perception could easily fit into the arms of smart glasses, with co-processors designed to aggregate sensors, artificial intelligence (AI) and computer vision computation appropriate to the devices’ nose bridge. .

The AR processors will feature a 4nm architecture with a central processing unit (CPU), Hexagon Tensor processor for hand and eye tracking and image processing, a visual analytics engine, Adreno display, Spectra ISP, and other components.

The communication modules will provide the world’s first WiFi 7 with a latency of less than 2ms, 40% lower power consumption, and a maximum speed of 5.8Gbps. The unit will also support high-bandwidth multi-link simultaneous support along with the platform’s FastConnect XR 2.0 software suite.

Co-processor technologies will include an integrated AI accelerator and resume engine for eye tracking, sensor and camera aggregation, a coprocessor security component as well as other features. The new AI unit is set to deliver over 2.5 times the performance over previous Qualcomm engines. 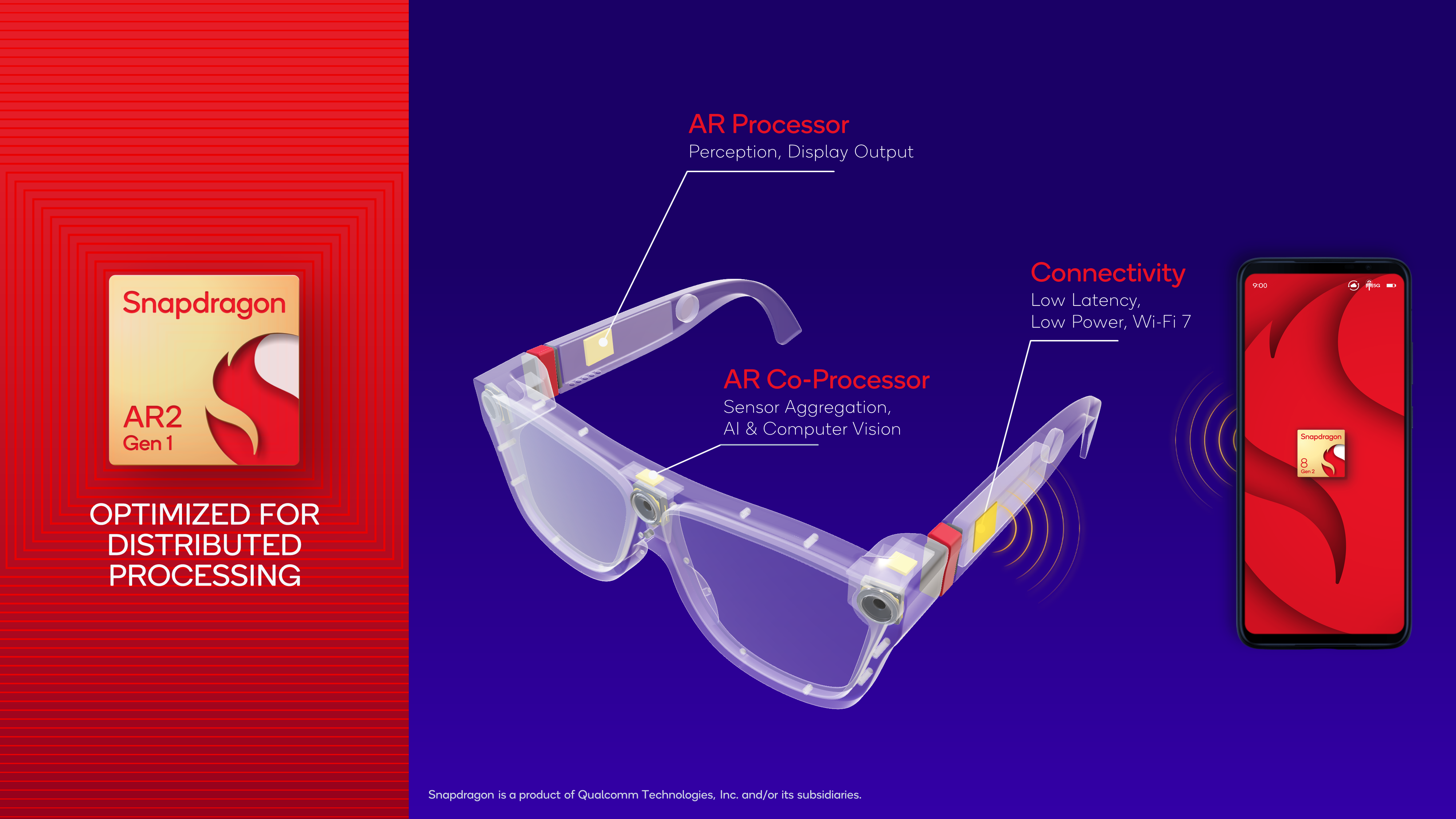 Both core and coprocessors will offer developers a 40 percent smaller printed circuit board (PCB) and a nearly half (45 percent) reduction in wiring for a streamlined system that’s cooler while consuming 50 percent less power than legacy hardware.

Many companies such as T-Mobile, Square Enix, Samsung, Meta Platforms, Lenovo, Magic Leap, and many others have leveraged the new platform for their XR devices while promoting startup accelerators to launch new solutions, and greatly expanding use cases for new technology. ..

Speaking to XR Today, Qualcomm explained that the new AR platform has the ability to block unwanted hand and eye tracking from malicious actors as well as third-party spyware when needed.

AR2 includes a security module in the CPU for on-demand, low-latency protection from hackers, unwanted or untrusted software, and other malicious actors. Conversely, the augmented reality coprocessor will compute AI-based functions for tracking, object recognition, and other functions.

He said in his testimony:

“We have a very strong security block [suspicious software] It provides adequate protection. This is something that ends up happening at the app or device level, and we have the tools to protect it [them]”

“These are new things that people are developing and exploring, and we are enabling ISVs to port their solutions to DSP and some of our IP blocks.”

He further explained that for eye tracking, his company has worked closely with Tobii for its solutions over the past few years. Additional ISVs like CORTEXR allow advertisers to analyze attention and stare to determine shopper behaviors. NeuroSync works closely with sports, military, and educational tools to diagnose brain injury, learn attention and vision, and produce rehabilitation programs.

This news comes just months after it unveiled its reference design, the Wireless AR Smart Viewer, in May, which runs on the Snapdragon XR2 platform with original equipment manufacturer (OEM) and original device manufacturer (ODM) support.

The latest design has allowed smart glass manufacturers to reduce the form factors of their products with an appearance that’s 40 percent thinner than that of competitors, using tiny OLED displays from Chinese technology company SeeYa.

XR Today recognizes that the step-by-step resolution of the XR platforms remained a critical step in producing the latest AR2 platform, allowing the company to reach its core hardware milestone.

Speaking about the benefits of the industrial metaverse, one of the fastest growing applications for the device, Amon stated in a report in February that the Metaverse will continue to be a huge platform for developing new hardware solutions and “a number of different opportunities.”