With the advent of technology, many newcomers have started in the mobile phone industry. Many new mobile phone manufacturers have entered the game, and it seems that it will not end here. The market will grow, and new entrants will enter as well.
Although competition is a challenge for all manufacturers, everyone is trying to produce a modern and high-quality product.
Previously, Samsung, Huawei and Apple were at the forefront of the market. Whereas other manufacturers have mainly targeted mid-range and entry-level smartphones. In turn, every manufacturer today is trying to be at the top of the ladder. Therefore, they try to produce their best by providing specific modern features to capture the market. 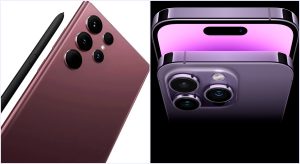 Samsung and Apple are the two leaders in the market

If we look around, we have many cell phone manufacturers in the market today. All produce modern, reliable features and are aimed at meeting the needs of the customer. Samsung, Huwaei, Realme, Redmi, Huwaei, Oppo, Vivo, Nokia, Sony, Infinix, etc. are trying to get the first place.

However, not everyone can be at the top of the ladder. Although everyone is trying to offer the best in terms of technology and progress.

Both Samsung and Apple produce top-notch smartphones with maximum features, design, and durability. The debate between Samsung and Apple is that who is the best is endless. Both have a large market share, and everyone thinks that the company they have chosen is the best.

Apple user says Samsung is trash, while Samsung users say iPhones are overrated. It is not easy to convince an iPhone user that Samsung is the best in all aspects. It is only possible to convince Samsung users that the iPhone is better. According to surveys, both companies have a strong market, and their customers are still waiting to switch to any other brand.

The young smartphone analyst ran a real-world performance test to get the best results about which company is on top. The test shows the real side of the image. In this way, we can determine if the test results accurately reflect how well the smartphones perform in actual use.

According to the test, the winner of each test gets 1 point. So it’s either one point or nothing. So, in the end, we will know how many points each phone received.

A test was conducted to see the scores of both devices. Geekbench evaluates the processor and memory performance of a smartphone. Not only that, but it matches them with actual life functions.

The score shows that Ultra has a Geekbench score of 1168 for the single base score. On the other hand, it got a score of 3508 multi-core.