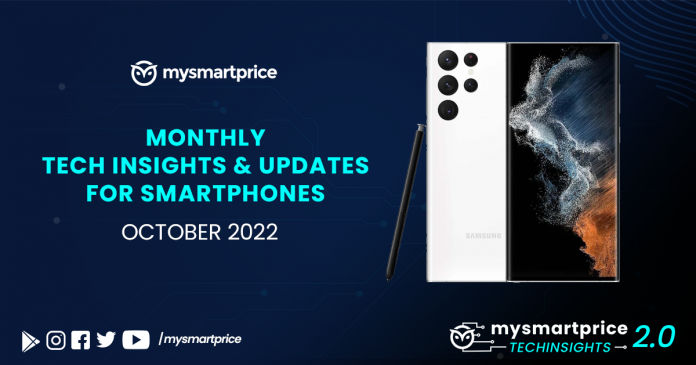 There are many new smartphones being launched in India every month and the market is full of options for customers to choose from. The smartphones are available in price segments ranging from Rs 5000 to over Rs lakh. With so many options in terms of different specifications on similar or the same smartphones, it is not surprising that people need to look for a different smartphone to make an informed decision. And this is where we come to.

Every month MySmartPrice conducts a survey and compiles a report based on the findings regarding the best smartphone brands and trends in terms of specifications and features. Monthly Technology Insights and Updates for Smartphones is a report that provides statistics for most aspects of the smartphone. Let’s take a deep look at our monthly smartphone tech insights and updates report for October 2022.

Realme C35: The most popular phone on MSP for October 2022

Realme C35, which was launched in India on March 12, 2022, has become very popular with various offers on Amazon and Flipkart during the festive season. The smartphone is also priced at Rs 11,349 which means that it falls into the most popular price category as well. It was followed by four different Vivo phones, which made sense because Vivo was the most popular brand for the month of October. 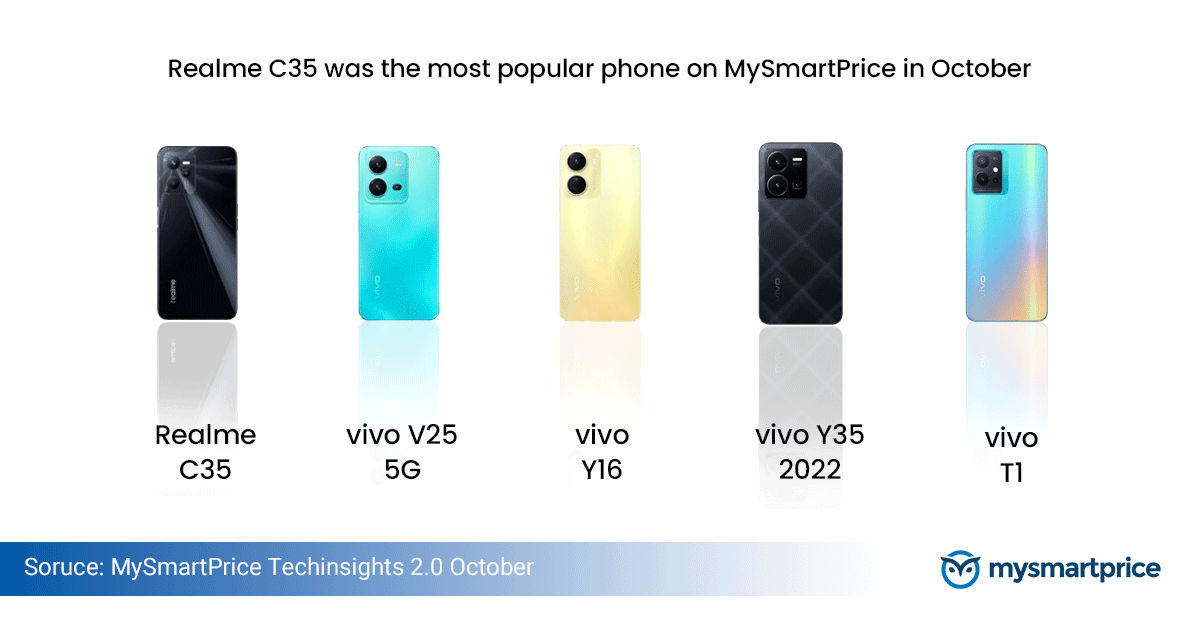 Realme C35 comes with a 6.6 inch Full HD + IPS LCD display with 1080 x 2408 resolution, 600 nits brightness and 180Hz touch sampling rate with waterdrop notch. Under the hood, the phone has a Unisoc T616 SoC paired with 4GB of RAM and 128GB of internal storage. Users have the option to expand storage up to 1TB via a microSD card.

On the back, it has a triple camera setup with a 50MP main camera sensor with an f/1.8 aperture along with a 2MP macro camera with an f/2.4 aperture and a black and white sensor with an f/2.8 aperture. For selfies, the phone has an 8-megapixel front camera. The device packs 5000mAh which is also the preferred battery size among users this month along with support for 18W fast charging. Realme UI 2.0 based on Android 11 runs out of the box.

In fact, this particular smartphone was so popular that the company launched a 6GB RAM + 128GB storage version of the smartphone recently which takes advantage of the more popular RAM and storage trends as well.

Vivo outperforms the rest to be the best brand 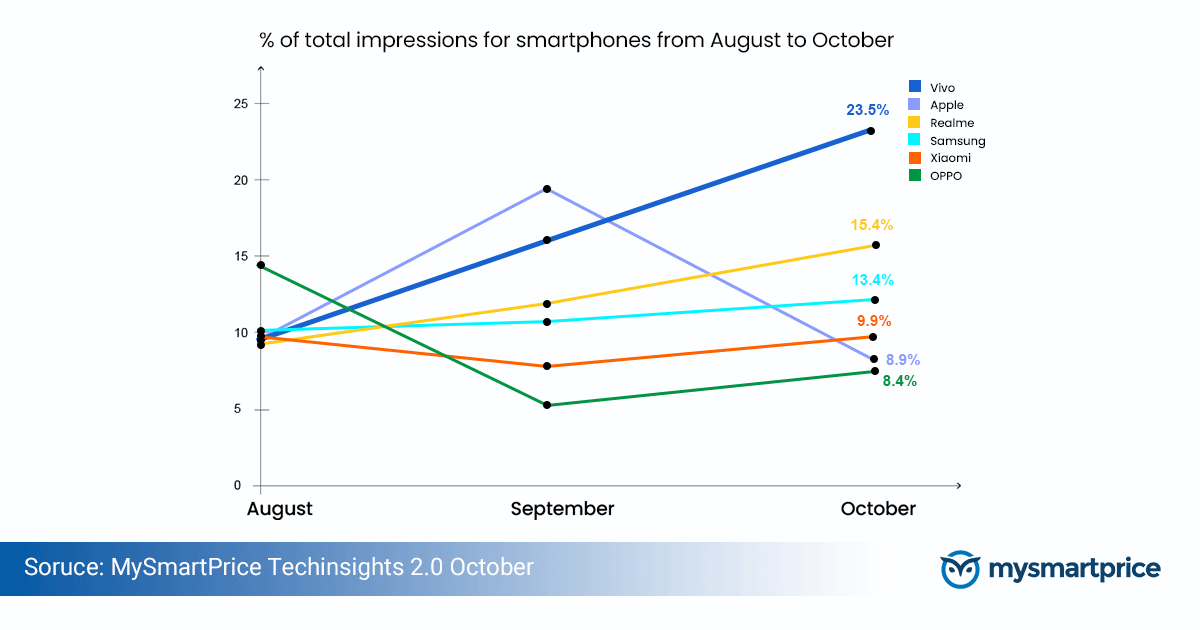 Vivo smartphones like Vivo V25 Pro 5G, Y35, T1 and many more received a lot of discounts backed by a plethora of features that propelled them to popularity. 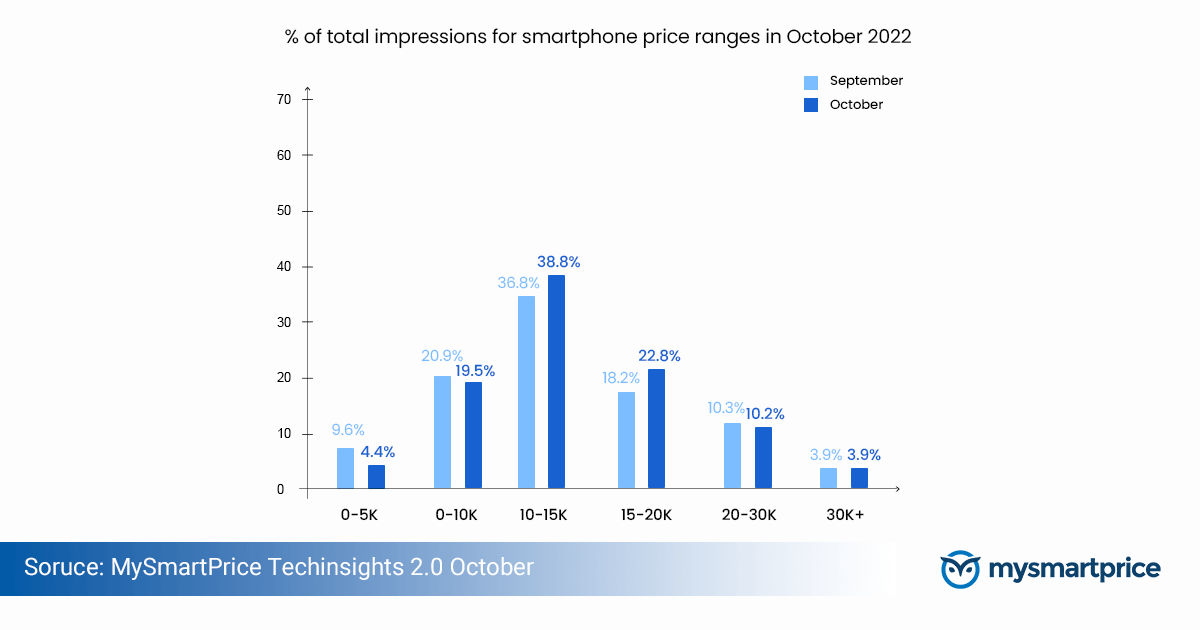 This may be a trend that shows that people have been waiting for Diwali sale on e-commerce to check out and buy some more expensive smartphones at a lower price.

Processor and storage trends don’t show much change, but RAM trends do

Qualcomm has been the most popular smartphone chip maker for the longest time, and it still holds the lead. But with the introduction of the Dimensity chipset series, MediaTek has finally become a strong contender. 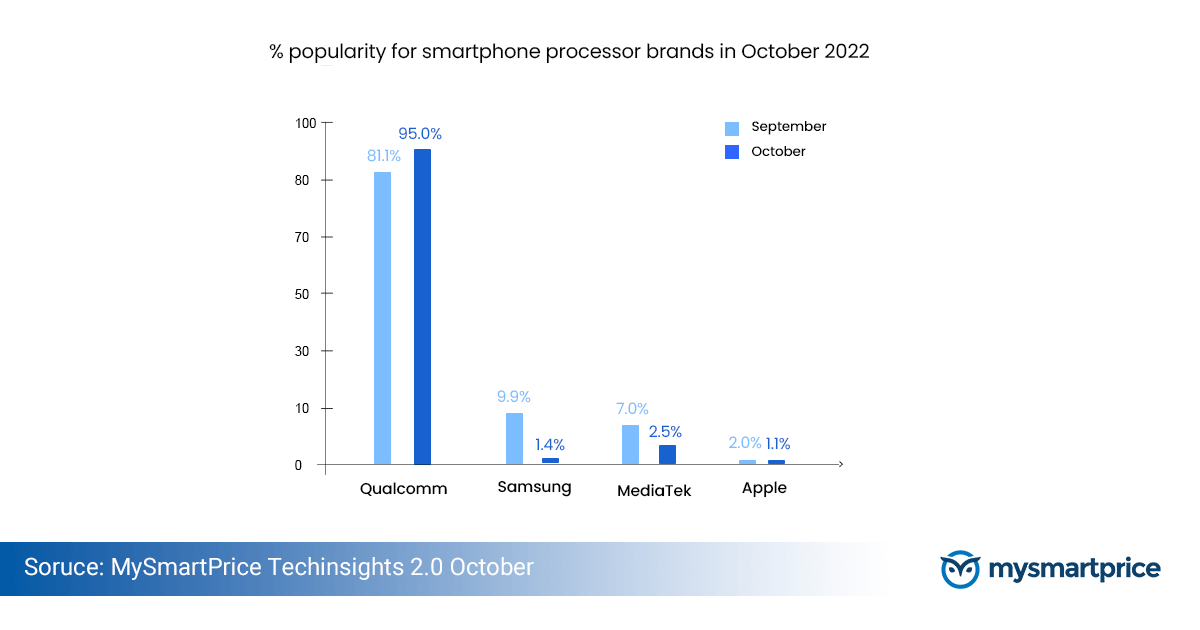 While that was evident in the slideshow from September, things seem to have turned in Qualcomm’s favor again in October. This time though, MediaTek has overtaken Samsung to take the second place for the preferred chipset brand. 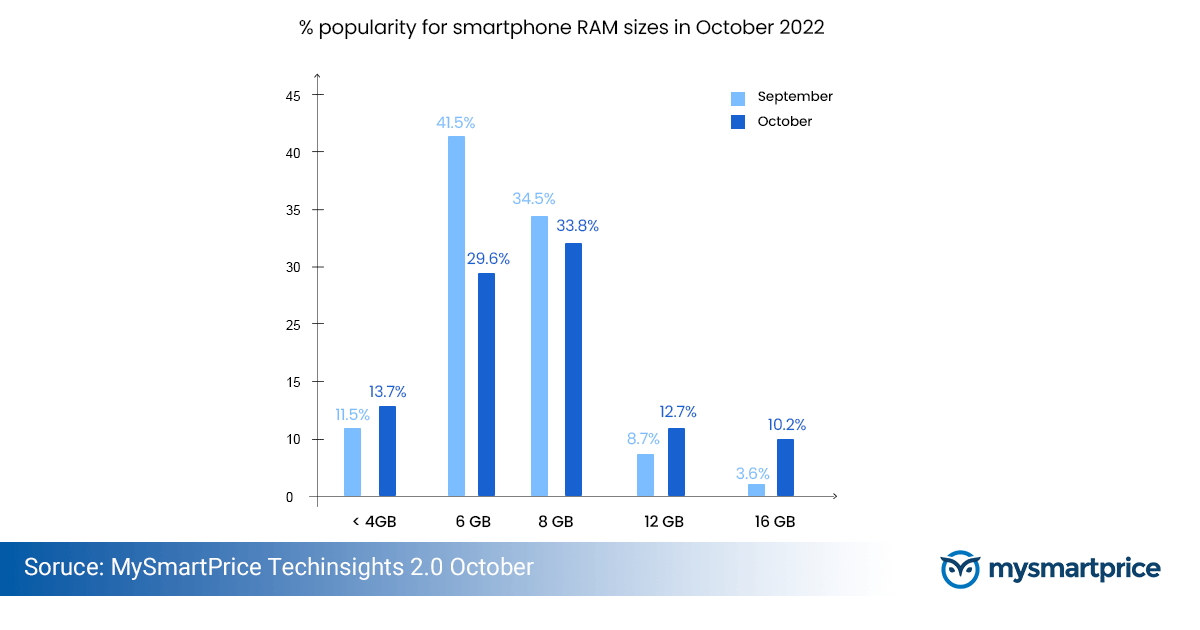 The preference for RAM seems to have changed quite a bit in a month as 6GB of RAM smartphones were the preferred choice in September, but 8GB of RAM phones became the talk of the town in October. One of the reasons may be that 8GB RAM phones have seen so many discounts that users have to opt for those over 6GB. 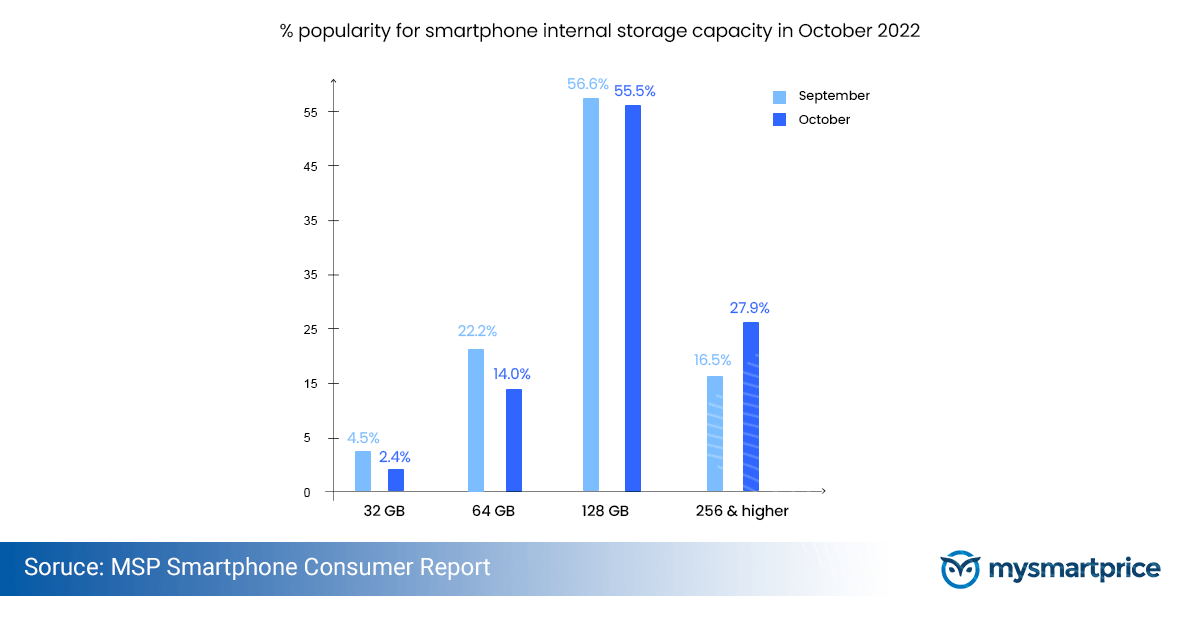 But the internal storage, which is fundamental and a major advantage for users to consider a smartphone, remained unchanged from September to October. People prefer that their smartphones give them the most storage space possible on a budget and 128GB seems to be the clear winner. There are many great smartphones that offer 128GB as a base or mid-range variant between 64GB and 254GB. 64GB storage is very small and 256GB increases the cost of the smartphone, thus 128GB storage seems to be the obvious choice.

People’s preference for phones with large screens and large batteries has not changed to complement them. Smartphone display resolution and image quality have gradually improved with each generation of smartphone, and it is normal for people to get smartphones that provide more real estate for viewing content. 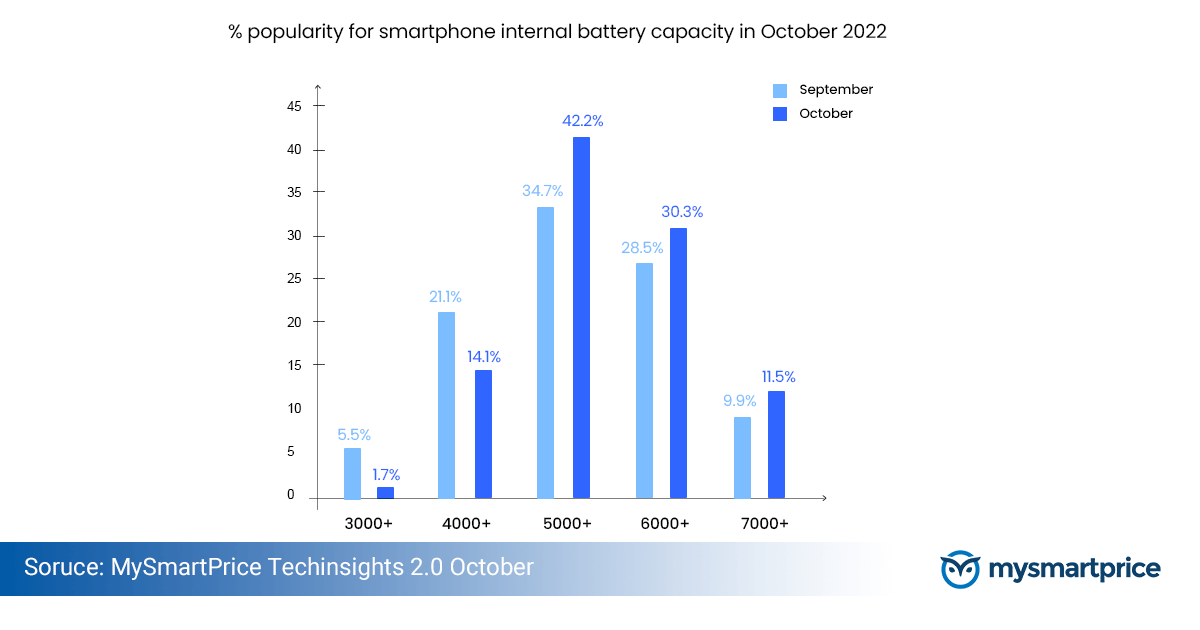 The same is the case with battery life, where a larger screen with technologies like AMOLED requires more battery capacity to run for longer. Hence the need for a larger battery capacity. But battery capacities in excess of 5,000 mAh become difficult to fit into an ordinary thin smartphone with a screen size of less than 7 inches. This means that the 5000mAh battery wins simply because there are more options compared to the higher options.

Samsung Galaxy S23 Ultra 5G is the most anticipated smartphone

Samsung smartphones and its flagships were some of the most popular smartphones launched during the year, and this claim stands out when the survey finds the Samsung Galaxy S23 Ultra 5G to be the most anticipated smartphone. The Samsung Galaxy S23 series of smartphones is scheduled to be launched in early 2023, and the hype machine has already begun to create expectations with all the details and leaks.

You can check out our full technical insights and monthly smartphone updates for October here.